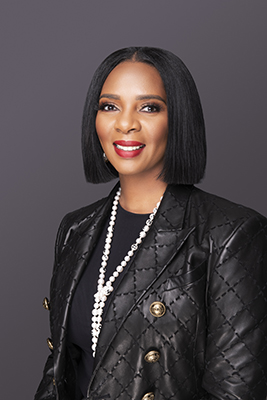 Joyette Holmes, Esq most recently was appointed to serve as the District Attorney within Cobb County, Georgia. She became the first African American woman to serve in this capacity within Cobb County. Appointed by the governor at the time, Governor Kemp, Attorney Holmes was appointed to the Ahmad Aubrey investigation. Holmes changed the stereotype of the everyday black woman. Conservative, Southern, and Black, Holmes gave a voice to a growing population of black women leaders. Holmes has since been replaced during the most recent election cycle as Georgia undoubtedly turned blue which enacted a change in her position. Holmes now serves as a diversity consultant, speaker, and author. Her goal is to give a voice to a growing group of black women.

Can you tell us, who is Mrs. Joyette Holmes?

I am a wife to my friend, partner, and husband of 20 years. I am a mother of 2 motivated, strong-willed teenage daughters. I am a daughter of hard-working, servant-leader parents. I am a hard-working woman, motivated servant leader, and partner in the mission to serve my community who started as a shy and insecure girl. I fought (and continue to fight) through those insecurities through involvement in school activities, academics, athletics, civic, and service organizations. I am motivated through my faith in God and in my desire to empower others in the way that I was empowered by family, friends, school counselors, coaches, and mentors. All of those things make up who Joyette is and why I do the things that I do.

Growing up, was going into the legal field always your first choice? Why or why not?

I always wanted to be a lawyer. There was a short time that I remember wanting to be a forensic psychologist, but that was going to be part of my quest prior to becoming a lawyer. It is in no way profound, by my motivation for being involved in the legal field was the TV show “Law and Order”. I enjoyed the dynamic of the investigation and how that investigation led the lawyer’s function in the case. I guess I was intrigued and never looked back.

Being a former chief magistrate judge, can you tell us more about what that experience was like and how it led you to your current position as DA?

The Chief Magistrate Judge is a county constitutional officer and thus each of the 159 counties in Georgia must have a magistrate court, unlike superior courts which operate within a circuit and state courts which are at the election of the county commission. In terms of the traditional functions of a judge, I handled criminal matters such as arrest/search warrants, first appearance hearings, and bond & probable cause matters; civil matters such as garnishments, small claims, and evictions; and, ordinance matters such as health, fire, and quality of life code violations. The non-traditional functions that were particular to the Cobb magistrate court were being an administrator with personnel (70), budgetary, and project management functions; being designated as a Superior Court judge and handling other in court matters from arraignment to jury trials and sentencing and temporary protective order hearings. The daily diversity within my role empowered me to expand opportunities for others in and out of the courthouse as well as gave me new perspectives and tools that would ultimately be an asset in the DA’s office and beyond. Through the experience in the magistrate court, I was afforded the honor of serving in state-wide leadership. I believe that it was the work, the innovation, and the character and quality of my leadership that led to my selection as the DA for the Cobb Judicial Circuit.

Your accomplishment as the first African American Woman to become the District Attorney in Cobb County is powerful. Congratulations! Can you tell us what pushed you to go for such a position?

The criminal justice system certainly has opportunities to adjust to new ways of addressing its commitment to public safety while also seeking avenues to empower people for good through alternatives to traditional case resolution. Having served as a criminal defense attorney, assistant district attorney, and a judge, I knew that DA had the ability to influence and create a lot of the opportunities that I speak of. I also did not take for granted that being an African American female, the first of both in that role, that I could bring a different perspective to the opportunities to change and drive the mindset around reforms that needed to happen. I am blessed and honored to have served as the first and pray my accomplishments in that space will empower another young person seeking to fulfill their mission through service – even when they don’t see anyone like them in the role.

Can you talk to us more about your non-profit organization, Project Restore 360? What motivated you to want to start it?

Project Restore 360 is an umbrella program that is on its way to gaining non-profit status. Two months after becoming the DA (on Labor Day), I began exploring ways to have an almost immediate impact on individuals who were struggling to get into or return to the workforce due to involvement in the criminal justice system. Georgia is the state with the highest number of people involved in some way with the criminal justice system. Any type of criminal history, including dismissed matters and matters resolved through alternative programs, was keeping people from furthering their education, getting jobs, and securing housing. The first project under the umbrella became the first-ever records restriction or expungement event and resource expo to be held in Cobb County. We were able to offer a free service to review applicants requesting that their criminal histories be restricted from the view of that outside of the courts and law enforcement. Most of those eligible for the restrictions were also able to get the court records sealed. On the day of the event, those same applicants and any others seeing resources could come out and get jobs on the spot; they could be signed up and accepted to paid training programs on the spot; they could get physical and financial health screenings on the spot, and sign up to receive other services and resources on site. We were able to accomplish this through private and public agency partnerships.

While providing opportunities described above will remain a part of Project Restore 360, the project will also seek to partner with other nonprofits to fill the gaps related to youth empowerment (breaking the school to prison pipeline) and criminal justice reform initiatives.

How can people connect with you to join or assist in any way for your Project Restore 360?

Anyone interested in partnering or serving with PR360 can send an inquiry email to joyette@projectrestore360.com.